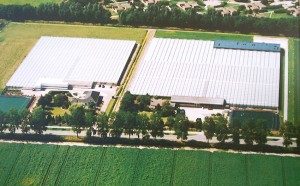 Jan v/d berg begun his company in the spring of 1959 on a piece of land belonging to his father. He begun growing potatoes and pickles. The pickles that year did so well that in 1960 he was able to buy his own piece of land 700 m²whereby he built his own green house. He grew French beans and tomatoes in the green house and on bare land all sorts of other vegetables. A year later another 700 m² green house was built where lettuce and cucumbers were grown.

Jan would bring everything to the auction house in Ter Aar by means of a boat. When the Ter Aarse auction closed down, he had to take his produce to the leidse auction. It was however no longer possible by boat but by means of a central transport provided for the growers in that region. A few years later the central transport stopped due to the fact there were almost no vegetable growers in the region anymore. Most of the growers had switched to flowers. There was nothing else to do but switch to flowers and thus roses it became.

Jan would transport the roses to the auction in Aalsmeer himself by means of a car. In the meantime he wanted to expand but the land was too small. That is how the company came to the current location in the Noordoostpolder.

It is here we built a 10.000 m²green house primarily for rose cultivation. However in five years we had to plant new roses three times. After an investigation it became apparent that there was an underground river running under the green house that affected the rose shrubs. To grow further as a company we had to think of pot plant cultivation. At the time it was not possible to do so with roses.

It is then we decided to go with Hedera’s. We began with Hedera helix in an 13 cm pot. A truck for the now budding company was bought which transported the plants to the auction. Meanwhile Carlo was welcomed in to the company. In 1991 a 6.000 m²green house was built with a big barn for the accretion of the plants. In 1997 the company purchased a 10.000 m²green house from the neighbour. After a thorough clean-up and construction period of about one and a half years  the new green house  introduced the 19 cm pot.

The Hedera’s are brought every day to three auctions and it is from here that they go all over the world.